Since their invention and over years of technological development, there has been an ever-increasing usage of personal vehicles as a means of transportation. Unfortunately, this wide-spread usage has led to a corresponding increase in road accidents involving cars. According to reports by the World Health Organization (WHO), there are an average of over 100 million accidents per year globally, leading to the loss of life of approximately 10 million people and about 50 million injuries. This inherent danger in automobiles led to the development of seat belts, a safety device in cars. The use of seatbelts has significantly reduced the severity of auto accidents. Studies have shown that the use of seat belts by vehicle occupants decreases the death risk and risk of grave injuries to the occupants by about 40 to 60%, and head or chest injuries by 59 to 83%. It is advised that all the vehicle occupants must use their seat belts, as unrestrained occupants pose a threat to the restrained occupants in the event of a crash. Therefore, fastening seatbelt while driving a vehicle is mandatory in several countries worldwide, including Malaysia. 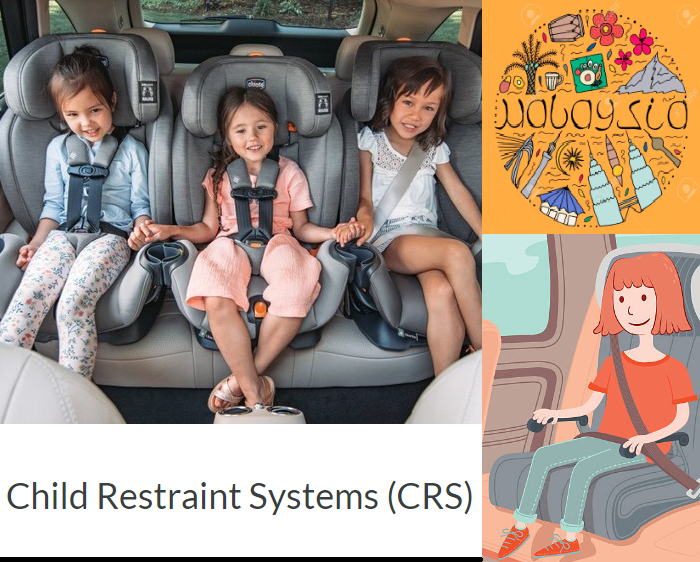 As effective as seat belts are in protecting vehicle occupants, their effectiveness significantly depends on several factors, with the most significant being occupant size. To work properly, a seat belt must pass across two-thirds of the occupant's torso and the occupant must be at least 145 cm in height. Because of these requirements, seat belts are incapable of adequately protecting children. This inadequacy led to the invention and development of Child Restraint System (CRS) for vehicles.

What is Child Restraint System (CRS)?

Child restraint system, also known as child seats, booster seats, and child safety seats, are special seats that protect kids from sustaining injuries in the event of collision, sudden braking, or deceleration of a vehicle. They are special seats consisting of a strap or securing buckles, adjustable components, and impact shields. They are engineered for child-vehicle occupants to protect them from fatalities in car accidents. The figure below shows a child restraint system.

According to the World Health Organization's (WHO) global status report on road safety, road accidents were the main cause of injuries leading to the death of children and young adults from 5 to 29. In Malaysia, children transported in private vehicles had the leading casualties in children of ages 1 to 4 with about 43.8% and ages 5 to 9 with about 30.2%. The proper usage of child restraints has been shown to reduce the risk of sustaining severe injuries by 71 to 89% and death by 28%. The importance cannot be overemphasized. These statistics point to the importance of the use of CRS for children.

To ensure the proper application of the child restraint system, there has to be a standard to be followed by both the manufacturers of the CRS and the drivers. The United Nations standards on the use of child restraint systems has been enforced and used by various countries worldwide. These standards have a single goal: to increase children's safety in cars. The UN Regulation 44 and, more recently, UN Regulation 129 states the standards.

The UN Reg 44 defines the construction and usage of the CRS based on the weight of the child. The manufacturers must indicate which weight group the CRS is. They are classified into five groups. For children groups below 13kg, the rearward facing CRSs are mandatory. While groups up to 18 kg CRSs have integrated harness systems or impact shields. The below chart shows the groups and their corresponding weight, age, and CRS. 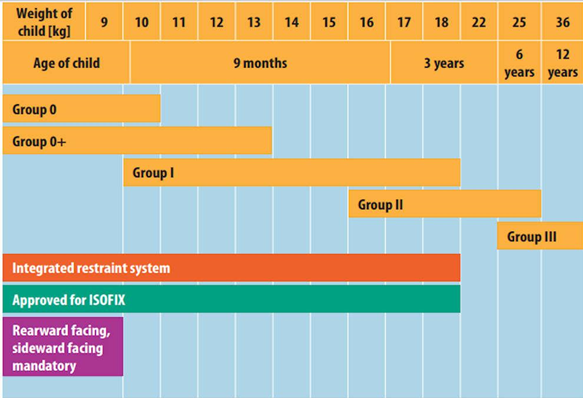 The CRS per Regulation 129 defines the usage of the CRS based on the children's body size (height). This system is known as the i-size system. They are installed using the ISOFIX anchorage points. Like in Regulation 44, children below 15 months old must use the rearward facing CRS, their labels also indicate the maximum size they should carry. This chart shows the height of the children with their approved CRS. 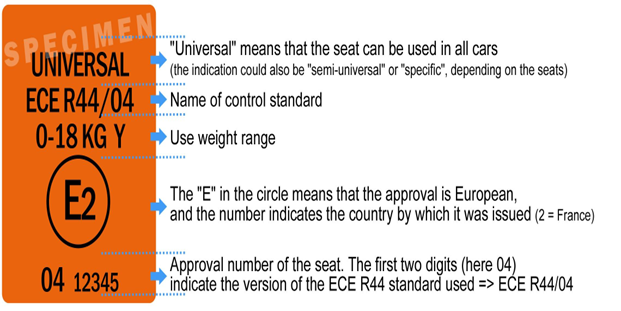 In the past years, surveys and observations showed that Malaysia had a meager percentage of private car users with children under 12 using the child restraint systems. In response to troubling occurrences and the statistics of Malaysian road accidents involving children, the government had to act swiftly and pass the child safety law under the road transit act 1978-motor vehicles (safety seatbelts). The law was passed and implemented on the 1st of January, 2020. It states, "CRS used in Malaysia must comply with UN standard (R44 or R129) and children must weigh less than 36 kg or with a height less than 136 cm, or aged below 12 years old."

Since the implementation, recent surveys have also shown that a relatively higher percentage of drivers either don't use the child restraint system or do not have the proper knowledge of the appropriate usage of the restraint systems. The lack of use can be factored into various reasons. One of them is that some of the lower-income families, though willing, cannot afford to get the CRS. Another is the lack of sensitization. Some people have not been thoroughly educated on the importance and proper usage of child seats.

The Malaysian government, under the Malaysian Institute of Road Safety Research (MIROS) and some other organizations, have taken steps to promote the use of child seats by all car users traveling with children.

• In the 2022 budget, the Malaysian government allocated RM30 million to aid in subsidizing up to 50% of the prices of child restraint systems around the country for lower-income families (B40 families). For CRS at RM 300 and below, there is to be a 50% reduction of the price, and for the ones above that, a maximum subsidy of RM 150 is applied. This step was taken to ensure the road safety of all the children regardless of their families' financial position. The MIROS made sure they checked and authorized CRS sales outlets that had vendors trained as Child Occupant Safety Instructors (COSIs) so that the buyers would be adequately sensitized on the correct usage of the CRS.

To partake in the subsidy, the families are required to visit the myCRS website, register, and apply for CRS. Once their eligibility status has been confirmed, they can head to one of the 259 authorized stores to get their child safety seats.

• On the 8th of August, 2022, the automobile giant, BMW, in collaboration with "Safe 'n Sound'' presented a total of 90 fully subsidized child seats to B40 families. These were presented as part of the next step subsidy program, which was introduced by the BMW Safety 360° Initiative taken in May 2022. The initiative was aimed at providing safety seats for lower-income families. Since the start of the BMW initiative, they have either provided for or subsidized the prices of child seats for about 400 families around the country. The following figure shows a picture of some of the executives attended the program.

During the event, the Managing Director of the BMW Group Malaysia noted that there was a very high number of applications (about 900) for the subsidy program, which showed the need to make the child seats more accessible to the community, especially the B40s. He further stated that the company would continue campaigning for the use of CRSs by families in the country. Child Occupant Safety Instructors (COSIs) also presented live demonstrations on properly using the CRS. Here is an image showing the live demonstrations by the instructors. 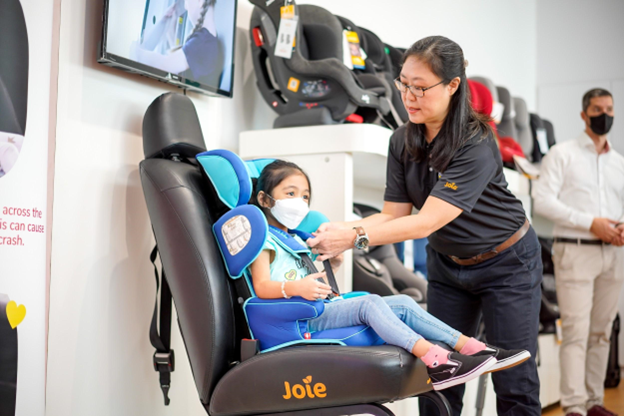 • In regards to the CRS prices and subsidization by the government, the Malaysian Institute of Road Safety (MIROS) released a statement earlier this year in May encouraging the approved eligible recipients of the subsidy program to purchase the child seats immediately. They further reminded that the seats are subsidized at purchase and not just by eligibility status. Since the announcement, the MIROS embarked on a tour around Malaysia. The tour is the "Jelajah Subsidi MyCRS'' program and is aimed at the creation of awareness on child road safety and the importance of child safety seats. They educate families on how to properly use the restraints, remind the approved families to make purchases, and encourage families who haven't applied to apply. On the tour, the MIROS assisted the eligible families who haven't applied to apply on the spot and get approved instantly.

The importance and effectiveness of using Child Restraint System (CRS) for child road safety are indubitable. Malaysia has experienced an increase in the awareness of the importance according to the Malaysian Institute of Road Safety Research (MIROS). This can be confirmed by the increasing number of applicants for the government's subsidy program and also by the large number of applicants for BMW's NEXTstep subsidy program. From surveys taken by road safety institutions, it was shown that the most popular reason for the non-usage was the incapability to afford the CRS. Various strategies could be implemented to significantly increase the percentage of CRS users in Malaysia. Some of which are for the government to increase the budget allocated to the subsidy program. This would enable more families (the lower income earning families) to be able to afford the CRSs. Secondly, the Malaysian Ministry of Transport (MOT) and other related bodies should carry out more road safety classes around the country in various organizations, institutions, and public gatherings. Finally, drivers traveling with children under the age 12 without using the proper CRS should be sanctioned and penalized. 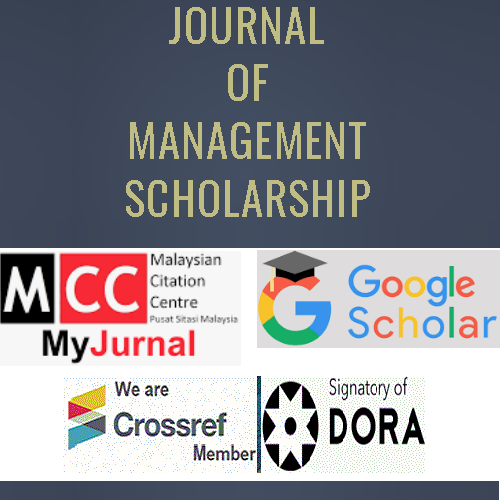