Driving in Malaysia: What Foreign National Drivers Should Know?

In today's world, road safety is considered one of a country's public major health concerns since the prevalence of road accidents and related moralities is alarming. The statistic of road traffic accidents in Malaysia began to increase since 2015 and a total of 255,532 road accidents were reported till the end of 2021 as stated by Transport Minister Datuk Seri Dr Wee Ka Siong. To reduce the chances of any unfortunate experience on road, foreign drivers must grasp preliminary information required before getting on the road. The driving styles and traffic rules vary in different countries. This article aims to provide some necessary information for foreigners, including students, foreign employees as well as tourists, regarding the traffic signs and their importance, driving rules in Malaysia, different types of driving licence, followed by procedure of converting foreign licence to the Malaysian one as well.

Traffic Signs and Their Benefits

Road or traffic signs are known as one of the most reliable traffic control tools used to regulate the orderly movement of vehicles. In general, traffic signs provide crucial information on routes, directions, and cautions, while they are regularly installed at the main conjunctions in cities and towns. Furthermore, the road signs apparently convey the intended message to the vehicle users; however, it needs to be stated that failure to pay attention and understand the instructions can be harmful and dangerous, while non-compliance with the rules and regulation result in fines for the drivers as well.

In other words, these signs are advantageous for drivers as they provide consistent rules, deliver warnings regarding the things that are not necessarily clear, keep drivers safe and secure, and enable them to be aware of the upcoming obstacles and manage the traffic flow well. Furthermore, most traffic signs use pictures rather than words; hence, everyone can interpret them, specifically individuals who speak foreign languages.

In essence, traffic signs come in various shapes and colors, with particular meanings. The different shapes and colors enable the drivers to recognize a sign as quickly as possible without interrupting their driving. Additionally, traffic signs consist of a broad range of information, including the speed limitations to information on where and when making a turn. Thus, the road signs help assure everyone's safety. The table below reports some of the significant road signs that foreign drivers need to be aware of in Malaysia. 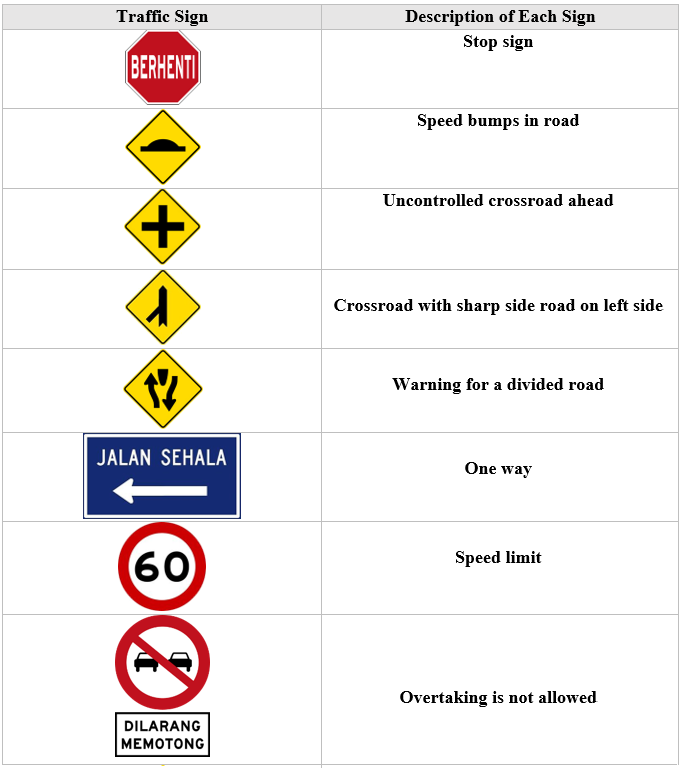 Moreover, traffic signs are commonly observed along the highways and on the construction sites to keep the public away from accidents and other unpredictable incidents. In other words, understanding the traffic signs and their relevant meanings can be as simple as identifying what the sign's colours, shapes, and symbols convey. As a result, the below table provides the most used colours in traffic signs, followed by their description.

Rules and Regulations of Driving Licence for Tourists in Malaysia

In Malaysia, the tourism industry is considered the most crucial sector in generating income and economic growth by engendering the gross domestic product (GDP). Further, Malaysia's tropical climate allows travelers to visit throughout the year; thus, tourism is the third-largest contributor to the country's GDP, after manufacturing and commodities. Based on a study carried out by Tourism Malaysia, one of the country's biggest tourist attractions is its rich culture and diversity, followed by the historical walking tours, cultural events, traditional arts and performances.

According to section 28 of the Road Transport Act 1987, the holder of a foreign country's driving licence can drive in Malaysia as long as the foreign domestic driving licence is valid, supported by a translation in English in order to prevent language barriers, and attested by the embassy of the country of origin in Malaysia as well. Hence, tourists can use their country's licence for 90 days, which is the duration of a tourist visa; yet, this situation also relies on the nationality of the applicants and status of their country with Malaysian government. In addition, driving licences from the nations stated below are identified and can be used for driving in Malaysia subject to regulations under the Road Transport Act 1987. Nevertheless, individuals who would like to stay in Malaysia for more than 90 days for different reasons such as working or pursuing their studies have to get their Malaysian driving licence which can be attained by attending the courses and examinations as prescribed by Jabatan Pengangkutan Jalan (JPJ).

Classes of Driving Licence in Malaysia

Malaysia offers various kinds of driving licences. The first type is referred to as the Learner’s Driving Licence (LDL), commonly called the ‘L’ plate driver, known as the initial licence that drivers receive after enrolling in driving courses. Typically, LDL holders are only permitted to drive a car with the ‘L’ plate indicated and be supervised by a professional driving instructor. While this type of driving licence can be issued and renewed for three (3) to six (6) months, it can be renewed for a maximum of two (2) years from the date the licence was issued. However, once it has expired, LDL holders must redo the entire procedure to acquire a renewed LDL; hence, it is advisable to complete the lessons before two (2) years.

The Probationary Driving Licence (PDL), also known as the 'P' plate driver, is another kind of licence that can be obtained once the candidates complete all the driving lessons and pass the examinations as well. In addition, these candidates are certified as eligible drivers by Jabatan Pengangkutan Jalan (JPJ). Nevertheless, new drivers are going to be subjected to the 10-point KEJARA demerit point system under this type of licence, while the points will be deducted depending on various traffic offences. Furthermore, the drivers' licence will be revoked or cancelled if they get 10 points within the two years of a 'P' plate driver.

Lastly, the Competent Driving Licence (CDL) is a form of a full-fledged driving licence issued by JPJ to a person after the two-year probationary period. Additionally, CDL drivers will be subjected to the 15-point KEJARA demerit point system that deducts points for traffic violations and may result in suspension or cancellation of the licence.

There are specific conditions when it comes to conversion of foreign driving licence to Malaysian licence. Firstly, the application must be eligible under a particular category, including Malaysia My Second Home (MM2H) visa holders, Malaysian permanent residents, married to a Malaysian, the employment pass holders, and dependent pass holders. Moreover, the foreign applicants must present specific documents such as an original passport and its copy, a valid visa for at least three months, a valid foreign driving licence, and a copy and an original letter from the embassy or consulate in Malaysia as well. Applicants can make an application through the nearest JPJ branch, and the successful applicants can collect their licence from the JPJ branches after approximately 30 working days.

Nevertheless, the automatic conversion is a more straightforward procedure where the local driving licence of foreigners from certain countries can be converted in a short period (approximately 1 to 3 weeks) to the Malaysian licence. The table below displays the countries approved for a direct conversion of licence without attempting the practical exams as well as the driving courses.

In general, getting a driving licence in Malaysia is not a challenging task since a complete driving lesson will be organized by the driving schools where candidates choose to enrol. However, it needs to be noted that new drivers need to find trustable driving schools to provide professional training to overcome their fears on the road. At the same time, the presence of a qualified driving instructor is crucial since he/she helps the candidate build confidence and establish good driving habits. The procedure for those not listed under the stated category, such as students and new drivers, is different. Therefore, they should go through a procedure illustrated in the table below to get their licence in Malaysia.

A domestic driver's licence can take you as far as the roads of your homeland. Nonetheless, individuals willing to drive abroad will need a more widely accepted licence, known as an International Driving Permit, regularly called "IDP". This type of licence is an official document proofing a foreign national's ability to drive a car on international routes, which also permits renting cars overseas.

Furthermore, IDP is valid for one year from the date issued, officially acceptable in 150 countries worldwide as published by the United Nations Organization. Since 1926, the United Nations has regulated driving in a foreign country through 4 international conventions; today, two conventions cover 98% of world countries, including the 1949 Geneva Convention and the 1968 Vienna Convention, in which nearly all IDPs are issued under these two conventions' regulations. Hence, foreign nationals who want to drive in Malaysia can use an International Driving Permit (IDP) issued by the country concerned before entering Malaysia. Drivers should note that International Driving Permit (IDP) can only be renewed in the drivers' home country.

The presence of a driving licence is crucial worldwide as this legal document proves that an individual is entitled to drive motorized vehicles on a public road. In general, each country has its own sets of rules and regulations to get a driving licence or convert a foreign driving licence to the local one. This article provided an insightful view of basic knowledge for drivers to drive in Malaysia, the rules and regulations regarding Malaysia's different types of driving licences, including IDP. Further, preliminary information on critical road signs preventing individuals from unforeseen incidents is provided followed by the procedure and rules of converting a foreign licence to a Malaysian one.